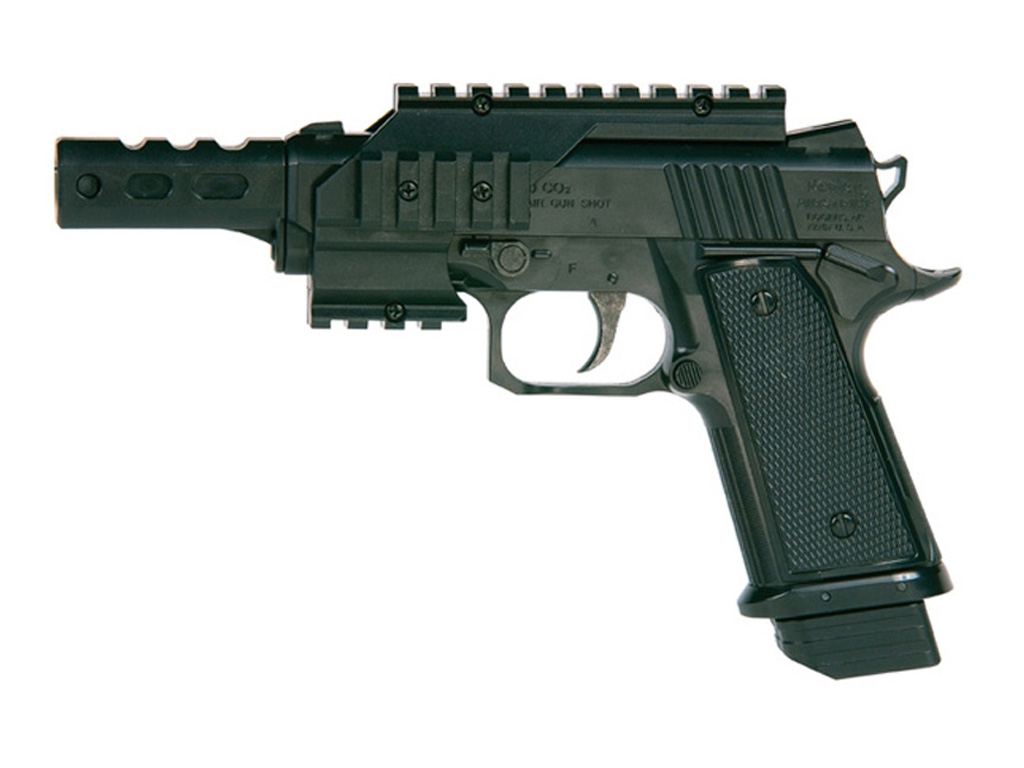 Trigger Pull: It's a double action only trigger so it will be on the long side. It's smooth all the way through the pull and not heavy. It's also satisfying in a way that I can only explain as though it's like a feeling that you are working well put-together internal metal parts.

Accuracy: I placed 5 rounds through my chronograph and got an average of 456 FPS, with the fastest shot hitting 460 FPS and the slowest shot in the string hitting 451 FPS. All within 9 FPS of each other, so very consistent. Next I set up a fresh paper target 30 feet down range and proceeded to obtain a 10 shot grouping using a seated and rested shooting position. Most of the shots were all under 1.5 inches apart, just a little high and slightly to the left. I did get a flyer that went a lower than the rest, lengthening out the grouping to about 2 inches in diameter. I'm pretty sure I'd be able to get a 1 inch grouping with the Daisy Powerline 5170 BB Pistol after some practice.

Build Quality: It seems to be decently made for a mostly plastic airgun. Like I said, the metal trigger feels solid and it also has a nice metal safety. All other external parts are plastic but it does feel like there are a lot of metal internal parts based on the weight. I would've liked to see more metal in the magazine as it does feel like the cheapest part.

Realism: The Daisy Powerline is basically a replica of a 1911. It has a shorter slide than a standard 1911, but the compensator adds a lot of length. The working safety is out of place for a 1911 since it's located where the slide catch would be and it doesn't even look like a 1911 slide catch. The location where the real 1911 safety would be has a moulded in non-working safety. Not to be picky but the trigger on a 1911 is totally different since it would be a very short single action only trigger. The only working parts are the trigger, safety, and magazine release.

Comments: I'm not a big fan of all plastic non-blowback airguns. But I'm willing to give the Daisy Powerline 5170 BB Pistol a chance since it has some things going for it like high FPS, which I know is important to many of you. It also has a really nice double action trigger, which should make shooting easy and fun. Overall, the Daisy Powerline 5170 performed well for me, shooting consistently without any issues. The pistol is fairly basic in design but does have the added mock suppressor that allows for a longer inner barrel, giving it more FPS. The sight rail also gives the pistol a lot of versatility when it comes to making the Powerline 5170 your own by adding on any accessory you can imagine.

Buy the Daisy Powerline 5170 CO2 BB Pistol in the US:
https://www.replicaairguns.us/daisy-5170-powerline-co2-pistol

Read the rest of my written Field Test Review over on our Airgun Blog with additional info and photos:
https://www.replicaairguns.com/posts/2020/1/3/daisy-powerline-5170-co2-bb-pistol-field-test-review

Buy the Daisy Powerline 5170 CO2 BB Pistol in the US:
https://www.replicaairguns.us/daisy-5170-powerline-co2-pistol
How are we doing? Give us feedback about this page.