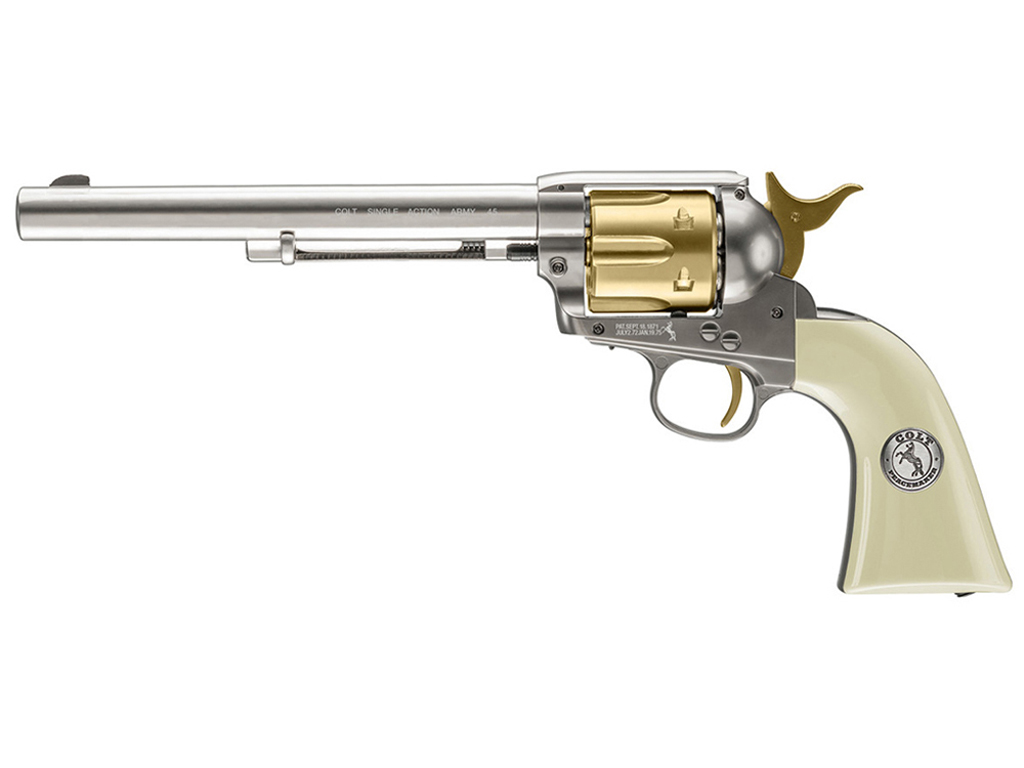 Trigger Pull: The trigger pull on all the Umarex single action army BB and pellet revolvers is really great. Being that these Single Action Army Revolvers are single action only, most of the work is done while you pre-cock the hammer with your thumb. The single action trigger pull is under 2 pounds and has virtually no take up with a crisp release. I love the ratcheting sound of the cylinder as you pull back the hammer, it's just like using a real SAA Revolver!

Accuracy: I have not yet tested the Umarex Colt Single Action Army Nickel & Gold Pellet Revolver so far but expect it to perform very similarly to the 4.5 inch barreled pellet shooting version I tested a while back. On that Field Test Shooting review I was able to get pretty close to the claimed FPS with an average of 378 FPS. During my accuracy portion shooting from 30 feet back onto a paper target I got a very respectable .75 inch 6 shot grouping using a semi-rested position. I do expect the slightly longer barrel on the Nickel and Gold version to perhaps improve FPS slightly.

Build Quality: All of the Colt Single Action Army BB and Pellet Revolvers have a mostly all metal construction other than the plastic grips and seals. The fit and finish is excellent with a great overall weight in the hand. The mechanical action of the hammer and trigger feels just like it would on a real single action army revolver. I really like the two tone nickel and gold finish on this longer barreled SAA revolver.

Realism: In terms of replicating a real steel Colt Single Action Army Revolver, again these Umarex old west 6-shooters are absolutely amazing replicas. It's really hard to tell the airgun version apart from the real steel version, with the exception of the smaller diameter shells and the discreet safety switch located under the frame. Even the barrel is nicely recessed and has some fake rifling twists in it to give the appearance of a large caliber barrel opening. The CO2 is well hidden with the Allen key built into the handle so no ugly CO2 screw tab hangs down.

Comments: We have pretty much established that these Umarex Colt Single Action Army pistols are fantastic airgun copies of the old west real steel 6-shooters in pretty much every way. For this reason they have been super popular! The Umarex Colt Single Action Army Nickel & Gold Pellet Revolver is yet another rendition of this same airgun but with a longer barrel and the two-tone gold and nickel finish. You will pay a bunch more for the longer barrel and two-tone finish, is it worth it? If you're on a budget perhaps not but if you want something that really stands out and may even perform just a little better, than pony up the extra bucks and pick one of these beauties up.