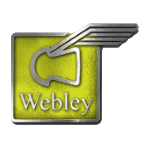 Founded in Birmingham, England, Webley & Scott started a new venture in air pistols and air rifles after moving away from manufacturing firearms as they had in the 1800s and 1900s. Webley & Scott carved a name for themselves by supplying the British military with revolvers and automatic pistols during World War I and II. Since then, the company has impressed the industry with famous Webley designs including the Revolver Marks I-VI, the Tempest, Stingray and Alecto. Choose from air pistols in .22 and .177 caliber or air rifles in .22, .177 and .25 caliber. One of the oldest and most trusted names in the gun industry, owning a Webley means owning a piece of history.

Out of Stock Watch Video Review
Items: 1-8 of 8
Next
How are we doing? Give us feedback about this page.