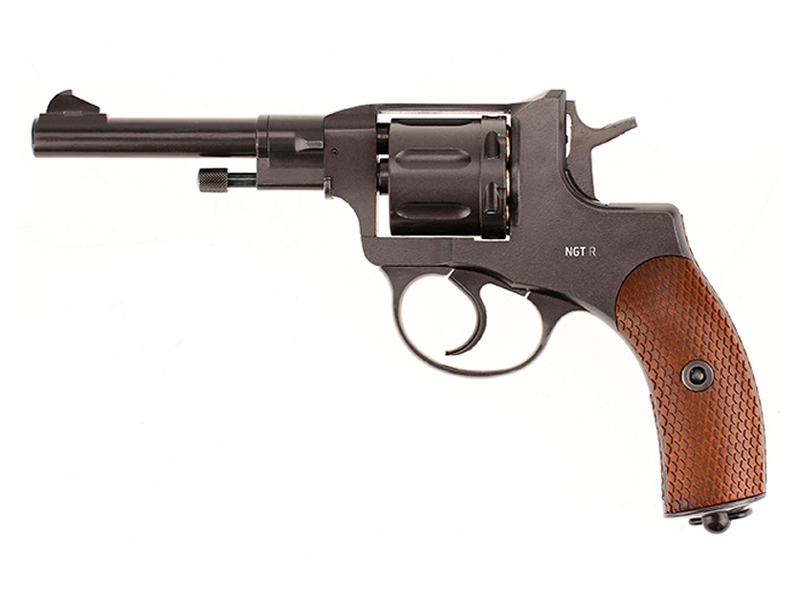 Comments: The Belgian revolver Nagant was a particularly popular model in the early twentieth century in Russia and later in the Soviet Union. It was used in both World Wars. For this reason, the Gletcher version was included in the “Russian Legends” series of air guns. This seven-shot revolver featured a unique cylinder that is reloaded one bullet at a time through a loading gate.

I always like getting outside and shooting the airguns I review even on these fall overcast days, at least the temperature was not too cold, right around 14 °C or 57.2 °F so decent for my testing purposes. The Gletcher NGT R like the BB shooting NGT is a fairly small air revolver and so pretty much anyone should be able to shoot this air revolver even if you have smaller hands, I did find that pre-cocking the hammer for single action shooting was a bit of a stretch when reaching over with the thumb, but you can just as easily shoot in double action, both trigger pulls are nice and light with the double action being a bit longer and heavier.

I really felt comfortable using the rather old school fixed open post and notch sights, the grey/black finish on the Gletcher NGT R may be a bit hard to see on darker targets but shooting on my white target was no problem. My 7 shot grouping from 30 feet back using a semi rested shooting stance produced about a 1 inch grouping well centred vertically just a hair to the left so all in all the Gletcher NGT R CO2 Pellet Revolver has the power and accuracy I was hoping for even in such a small package.

I would definitely recommend the Gletcher NGT R CO2 Pellet Revolver, not only is it a real looker but it also has the performance to back it. even better than its 4.5mm Steel BB shooting brother.

This YouTube Video Preview covers three really nice CO2 Pistols recently added to our Replica Airguns Canada Store. One is a pellet pistol from Gletcher called the Gletcher NGT R which is for the most part the same as the standard 4.5mm Steel shooting NGT but the R model is made to shoot .177 caliber pellets so it also has a rifled barrel. I am expecting pretty decent accuracy with this pistol!

Next up we have another Gletcher Pistol that is actually made by KWC, I have already done a table top review of the KWC version of this same Makarov PM pistol. Gletcher simply has placed their own branding on the KWC version and call it the Gletcher PM 1951 but it is the exact same gun as the Makarov PM but with different markings on the gun.

Last but perhaps the best or at least most anticipated gun I am showing off today is the Umarex S&W M&P40 Full Blowback CO2 BB Pistol. This is a really nice acurate replica of the real steal S&W M&P40 with full licensing and pretty much every part operational like it would be on the .40 caliber version.

Buy the Umarex S&W M&P40 CO2 Blowback BB Pistol in Canada:
https://www.replicaairguns.ca/smith-wesson-m-p40-bb-pistol-co2-blowback
How are we doing? Give us feedback about this page.