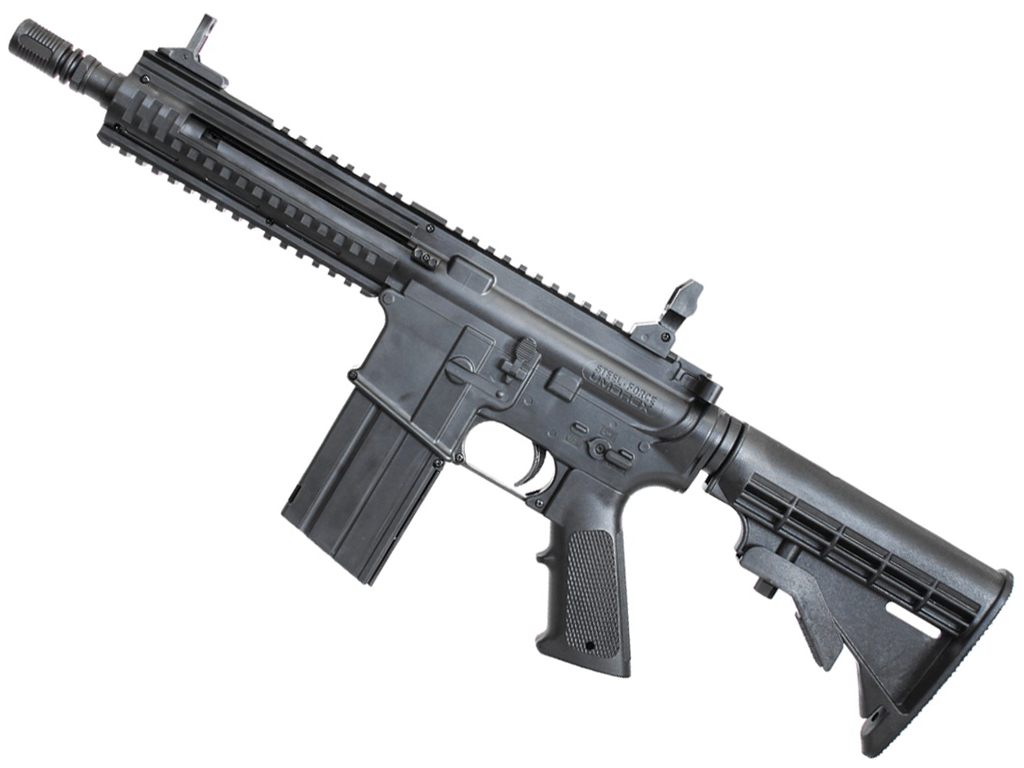 Trigger Pull: The trigger pull on the Umarex Steel Force CO2 BB Machine gun is single action only, so you will need to charge the rifle by pulling back the charging handle first, one this is done the trigger is reset and ready the gun is ready to shoot. The blowback operation charges the internal bolt automatically afterwards so keep this in mind, to release the bolt you will need to take out the CO2 magazine and press the trigger. The trigger is fairly light but has some initial take up and then a bit of creep before it releases the bolt.

Accuracy: I shot the Umarex Steel Force at a target from 30 feet away in a semi rested position using both the semi auto and 6 round burst modes, the Steel Force performed very good getting around a 1.5 inch 10 shot grouping in semi auto and then spreading out a bit in 6 round burst mode which was to be expected, still a respectable grouping. Shots where well centered on the target but I did have the advantage of using a red dot scope, I found when using the none adjustable open sights that come with the Umarex Steel Force that I was shooting under the target at closer ranges. My Chrony testing did not go exactly as planned due to my temperamental Chronograph but I was able to get two shots to read and they average out at 466 fps, well over the 430 claimed fps.

Build Quality: The Umarex Steel Force CO2 BB Rifle is mostly plastic on the outside with most of it's metal parts on the inside, you will find a metal flash hider, metal trigger and metal trigger guard but other than that everything else externally is plastic. The plastic seems durable enough but it has just a bit too much shine for me which I think makes it look less like metal and more like plastic. Everything seemed to function as expected but again I would have liked to have seen a bit more metal, not necessarily the outer shell, but I feel the selector switch, sights, magazine release, charging handle and front and back sights could have been made out of metal and would have given this Umarex rifle a bit more weight and balance.

Realism: The Umarex Steel Force CO2 BB Rifle is designed on the AR platform and for the most part is about the right size shape and look of an AR pr M16 rifle. Even the selector switch, magazine release, rear adjustable stock and Charging handle function just like a real AR! Some parts are model in just for looks like the bolt release, dust cover and forward assist but at least they fully look the part. The plastic for me was the real tell here as it kind of looks like plastic where as some plastic guns are really hard to tell they are not metal, but other than that this is a pretty decent replica of an AR Rifle.

Comments: The Umarex Steel Force CO2 BB Machine Gun is for sure an improvement over the Steel Storm, first of all it is a true replica of a real rifle in production (The AR/M16 platform), it also has a rear stock that is adjustable which makes shooting this gun on target so much more easier. Overall I feel it shoots better than the Steel Storm with improved accuracy and performance. With that said the Steel Storm is still a great BB machine gun if you’re looking for more of a pistol SMG design. For the low cost of the Steel Force you really cannot go wrong, this BB machine gun will put a smile on your face every time you take it out to shoot it.

Average Rating
Based on 2 rating(s)

Well as the same as anyone who owns this gun. It would be my go to gun but when the trigger stops engaging and you hope it would be free shipping back to umerax noooo its 35 dollars i cant help it i deserve this gun priority its only 2 months old come on do i get a loner gun or something besides hurryup and wait n the attitude i got from them. anyway they would have a super winner if they put some better quality in it make it a gun guys a great gun if its ur job and u love it so heres to the future new steel to a great gun soon to be better a lot better
Was this review helpful to you?  1  0
Money Value
Accuracy
Quality
Feb 18, 2018

I loved this BB gun. Looks great. Feels great. Shoots nicely. Easy to load. Inexpensive to operate. Will wow all your friends. Endles enjoyment, until....it breaks. Therein is the reason for the "1" rating. Simply poor manufacturing. Go to Amazon and read all the 1 or 2 or 3 star reviews. Everyone loved the gun, but always had a catastrophic failure. Normally the trigger goes dead. Almost always within the first 1000 rounds. When you call Umarex they seem uninterested other than asking you to ship it back to them if it is still in the 90 warranty period. Shipping USPS cost me $17. This gun would be a perfect "5" if they could just make it to last. Maybe someday.
Was this review helpful to you?  1  0

I often get asked about using a 4.5mm Steel BB gun for pest control and to be honest I really don't think a BB gun is the right tool even at close range to properly and humanly take care of pests when need be. A much better tool is a high powered pellet rifle in just about any caliber as long as you have taken the time to practice your shot placement at a variety of ranges. Read full article here: https://www.replicaairguns.com/2014/9/6/bb-guns-shooting-at-longer-ranges.html Buy the Umarex Steel Force in Canada: http://www.replicaairguns.ca/umarex-steel-force-air-rifle.html